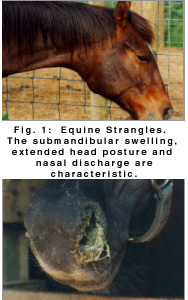 Streptococcus equi causes equine strangles, a highly contagious disease of the upper respiratory tract. A 58 kD acid and heat resistant M-like protein (SeM) is an important virulence factor and protective antigen. Resistance to reinfection in convalescing horses appears to be more strongly associated with SeM-specific IgG and IgA in the nasopharyngeal mucus than with opsonic antibody in serum. Administration of an immunogenic peptide of SeM (SeMF3) intranasally by itself stimulates a limited mucosal response. Sucrose Acetate isobutyrate (SAIB) is a high viscosity excipient that provides controlled release of biologically active substances. The potential of SAIB as a delivery system for intranasal immunization of horses with an immunogenic region of SeM was investigated in the present study. A vaccine was prepared in which SAIB was dissolved in 25% ethanol and recombinant SeMF3 added to a final concentration of 100ug/ml using dimethyl sulfoxide as a solvent. Two mls of vaccine were administered intranasally to each of 11 adult mares using a soft catheter on day 0 and 28. Nasal washes and serum samples were taken on day 0 and at 2 week intervals. SeMF3-specific IgG and IgA responses were assayed by ELISA. Six mares showed an increase in serum IgG antibody. Nine showed mucosal responses similar to those observed in convalescent horses. A booster response occurred after the second vaccination. These results suggest that SAIB has potential as a vehicle for intranasal immunization of horses with antigenic peptides.

J.Nally is supported by a Maxwell and Muriel Gluck Fellowship in equine studies. We thank Dr. Chris Stokes, Bristol Veterinary School, Bristol, England for his generous gift of mouse anti-horse IgA monoclonal antibody, and the mares of Ashford stud for their willing cooperation.